At Carson's 5 year old check-up, his pediatrician was a little concerned when he didn't do so well on his eye exam. It's hard to tell at this age if there really is a "problem" or not, so he referred us out to the best pediatric ophthalmologist in our area. I took Carson on Friday afternoon for his exam. He wanted to take his favorite bear, Rainbow bear, along for the exam (thanks Aunt Sharon!) 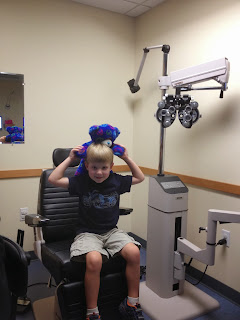 The exam started off with a simple letter reading chart. He did great on that. 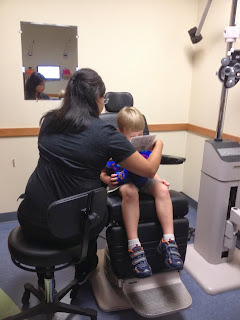 Then they tested his depth perception using 3D glasses, as well as a color test. I was a bit confused at first when the nurse examining him was questioning me on whether or not he knew his colors. Of course he knows his colors I kept saying, but the more the color test went on, the more questions she had for me. She asked if color blindness ran in our family, and my grandfather was indeed color blind. She let me know then that this was not going to be a quick visit and Carson's eyes would need to be dilated. 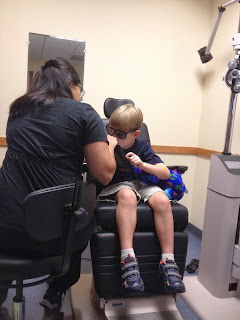 After his eyes were dilated, they took pictures of his eyes before we saw the doctor. They were SO good with Carson (and me, as I was a bit tearful!) They let Rainbow bear do everything Carson had to do and made each exam super fun for him. 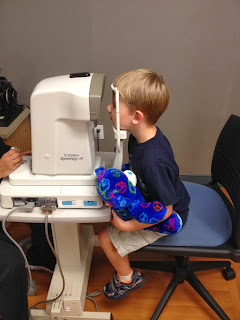 The doctor put on a movie for Carson in the exam room and went on to explain to me that Carson has an astigmatism, and is also near sighted and far sighted. He also said that his color shades are a bit off, which they called a color deficiency, but were not concerned by any means about that at this moment. I was a bit emotional as I had prepared myself for the possibility of glasses, but the Mommy guilt sets in on what I did wrong or how I didn't know our baby needed them so badly! I burst into tears when the doctor began to switch lenses in and out of pretend glasses while Carson watched a movie and Carson yelled out, "I can see the castle!!!" The doctor instantly knew which lenses he needed and we were off to the optical department to pick out our super cool glasses! 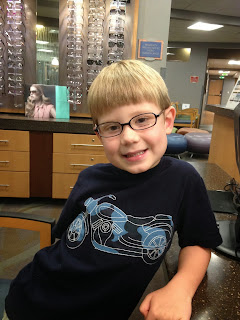 We have to wait about 5 days before his glasses will come in, but are using these days to prepare Carson for this transition. Here's our super cool dude coming out of the eye doctor with his cool shades and lollipop! He did awesome for a 3 hour appointment! 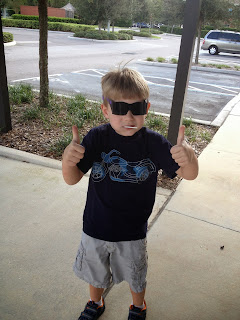