Our sweet baby boy has been suffering from constant ear infections for the past 3 months. After his 6th ear infection in 10 weeks, we visited an ENT to have him looked at more thoroughly. After evaluating his level of fluid in his ears, and a 7th ear infection just 2 weeks after his visit to the ENT, Matt and I made the decision to go ahead with the ENT's recommendation and have tubes put in Tanner's ears. The surgery was scheduled for 7:30 a.m. and we had to be at the surgery center at 6:00 a.m. Tanner had to fast from the night before too. Here we are waiting in the waiting room: 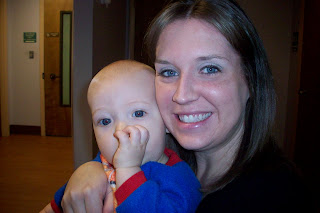 We had been praying for the surgery from the time we found out he definitely needed it, and had several others praying for us too. Tanner was a complete angel! He never once cried from the time we woke him up, to the time I handed him off to the nurse. God gave Matt and I so much peace during the whole morning and we are SO thankful! The nurses and staff were super. They played a Baby Einstein video for Tanner while we waited for the Doctor to begin the procedure. 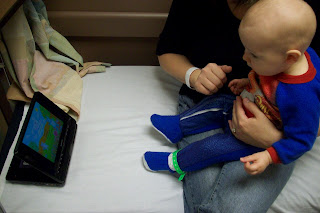 They let him stay in his comfy pj's for the surgery and we had fun being silly with the operating hats. 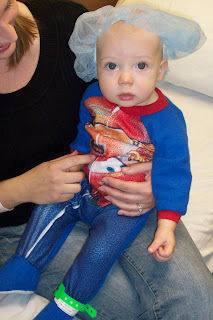 We were so grateful that they were true to their word that we would only be apart from Tanner for about 10 minutes. The procedure was super quick, but when Tanner woke from the anesthesia, he was not a happy camper. We got to him quickly and were able to calm him. After they were certain he was coming out of the anesthesia well and was able to eat, they sent us on our way. He fell right asleep in the car. 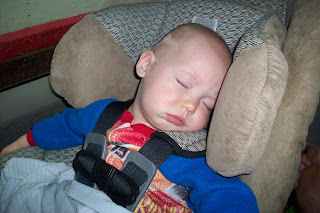 When he woke up from his nap, he was back to his happy self! Matt and I were so impressed that he bounced back so quickly and was crawling all over and ready to play! 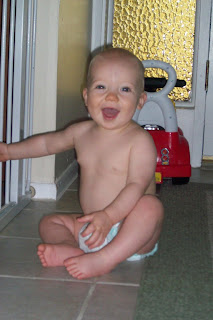 Because it's very important that Tanner does not get water in his ears, I gave him a bath in the kitchen sink the first night so that I could really control his splashing! I put earplugs in his ears, and a special headband, he was so cute!! 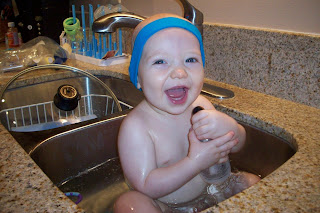 Since the surgery, we have noticed that Tanner babbles alot more! He was saying "Mama" and "Dada" before, but now he says them more often, and goes on and on with different sounds. We think it's because the fluid is all gone and he can hear better. We are so thankful that everything went so well!
Posted by Jill DeMoor at 7:58 PM