Our sweet little Tanner is 3 months old! He is growing like a weed and changes everyday. He rolled over for the first time today! I put him on his back on his ocean playmat only to find him like this when I came back in the room... 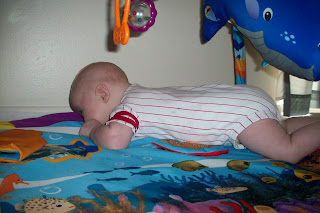 Here he is working hard to turn over in his crib. He sometimes can't figure out how to get his arm out of the way! 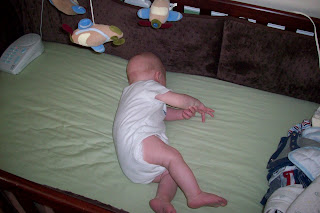 We sat him up in his bumbo seat for the first time since he's doing so good with holding his head up. He wasn't so thrilled as you can tell by his expression! :) 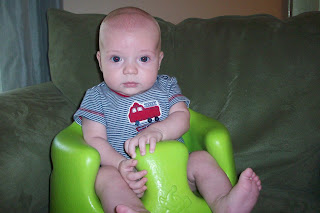 One of our favorite things about this month is how much Carson and Tanner are interacting. Carson loves being close to Tanner. Carson calls Tanner "T-T" and tells him all the time, "Baby cute!!" and gives him kisses. Tanner watches every move Carson makes. 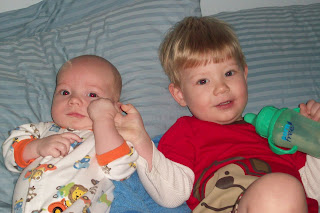 Turning 3 months meant it was time to move Tanner out of the bassinet and into his big boy crib. This was hard for Mommy, but Tanner found his crib much more roomey than his previous bed. He even wiggled his way out of the sleep positioner! 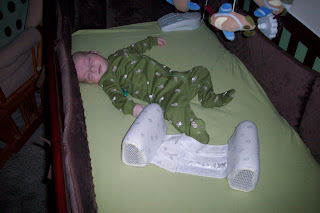 Tanner is such a smiley baby too! All you have to do is look at him with a smile and he will give you a big smile back. We aren't due to go back to the doctor until next month, but I did have Tanner weighed just to make sure he was gaining. Boy is he gaining! At 3 1/2 months, he weighs 14lbs and 11oz! He has gained 4 lbs in 6 weeks! We kid around that Tanner is going to be our quarterback. Can't you tell by his cute chubby cheeks? 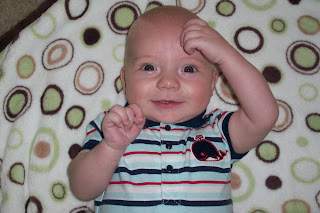