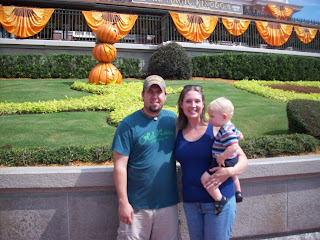 M-I-C-K-E-Y, M-O-U-S-E! You can't be in the DeMoor family and not LOVE Disney! Normal people don't take their child to Disney until they are old enough to remember because it's so expensive to get in, but we are blessed that Matt's dad is a Disney employee and can get us in for free anytime. We took Carson to this magical place for his birthday. 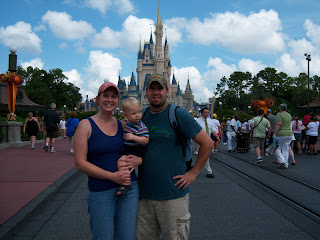 He definitely was taking it all in when we first arrived. The ferry boat over to the Magic Kingdom was enough fun for him, we could have turned around and gone home. Our first stop was Fantasy Land. Tigger and Pooh were signing autographs and taking pictures. The line was outrageous, but Matt took Carson to play on the Winnie the Pooh playground, and I stood in line waiting for our turn. He LOVED Pooh! We were expecting him to have either no emotion, or to be a little scared, but he was the total opposite. He was grabbing Pooh's face and squealing. This picture describes it best. 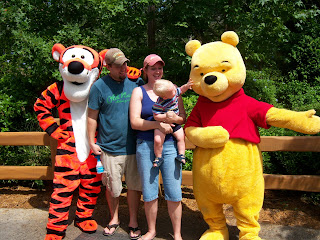 Next was the Winnie the Pooh ride. We walked right on it and he hung on to the bar, in the car, for dear life. It was not fast at all, just a simple little honey jar that takes you through a Winnie the Pooh story. 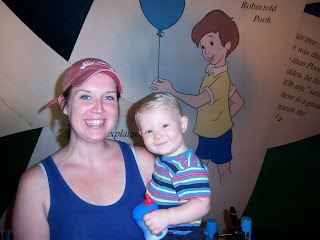 Then off to Toontown to visit Mickey and Minnie's house. Inside of Toontown, they also have a little splash park that he cooled off in. We caught the train from Toontown and headed to the next adventure. Carson's next adventure didn't start for awhile...the parade. Luckily, Carson fell fast asleep in the stroller and took a little snooze while we waited at the Magic Kingdom entrance to watch the parade. He woke up just in time to jump on Daddy's shoulders to see all the action. 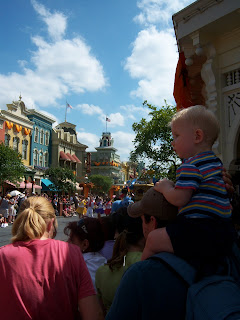 We even bought him his own Mickey ears and had his name embroidered on it. He wasn't too excited about wearing it, but at least we have the ears for a little souvenir. 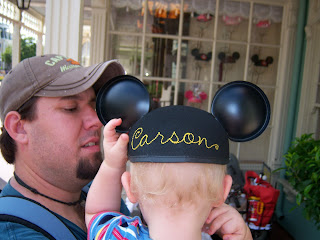 After the parade, we headed over to Epcot to meet our friends. Landon is Mickey Mouse's biggest fan and he showed Carson his favorite part of Epcot...meeting the characters. 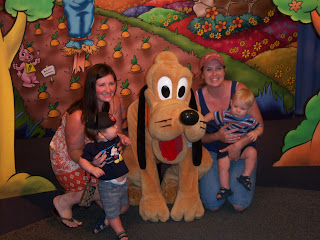 After dinner, we took the boys to watch Epcot's fireworks. They were so loud that even I was a bit bothered. We rushed Carson inside a nearby store and tried to distract him with stuffed animals! 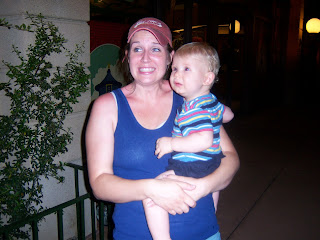 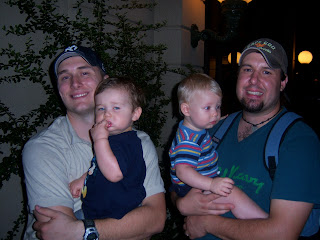 What a fun day and great memories!
Posted by Jill DeMoor at 7:59 PM